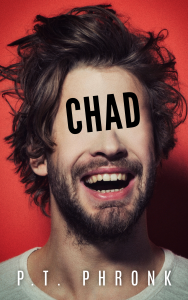 Hello. This is the writer known as P.T. Phronk. I wrote a short story about a guy known as Chad. The story is called Chad.

This one is pretty weird, both in terms of the story itself and how it is written. It’s not for everyone; probably more of a love it / hate it type of thing. That’s why I’ve made it free wherever I can. Maybe you can give it a try and see if you love it. Here’s the description:

Chad has a secret. They’ve been best friends for a while now, but if the hesitation in Chad’s voice is any indication, that could all be over. Trying to figure out what’s wrong may drive him crazy, but soon they will meet, and Chad’s secret will be revealed.

This book also has a secret. See if you can figure out what’s unusual about this story before you get to the end.

Chad is a short story about awkward friendships with some unusual twists.